A new acquisition at UH Libraries Special Collections features materials documenting the post-punk band Mydolls. The archive of the women-led group reveals its 40-year advocacy of equality, female empowerment, and minority representation in the arts. 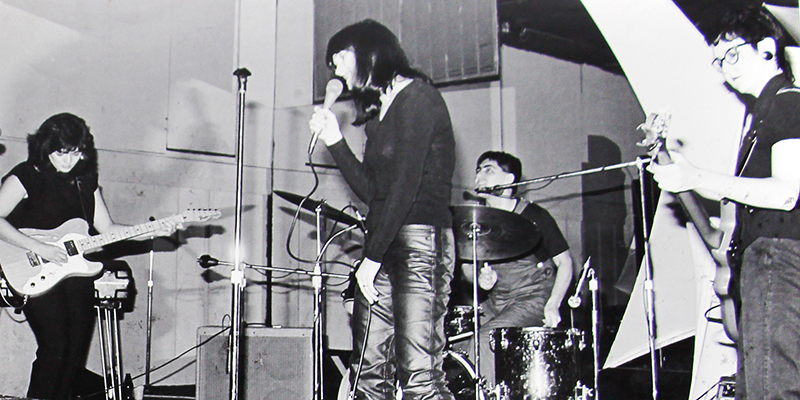 As most of the early punk narratives go, we banded together with other likeminded and artistic individuals in Houston to create an alternative arts scene that welcomed the outsiders, the misfits, kids like us who wanted to create a world of our own without rules. So much creativity rose out of this period when contemporary artists like William Steen, Mel Chin and Mark Flood were just getting started. Our band’s archive preserves a lot of this early history in photographs, letters, flyers, zines, our cassette tapes from the road, even hand-painted tee shirts to promote the independent film we have a cameo in, Paris, Texas.

We wanted to donate the band’s archive, a DIY chronicle of our herstory, so that everyone who is interested could be exposed to Houston’s underground art and music scenes. We’ve lived out the punk rock ethos of being ourselves as original artists, staying true to our beliefs even if it meant that we would never be signed to a major label. We’re proud of the many artistic and multidisciplinary collaborations we’ve been a part of with national, international, and local artists and want to share those stories on a local level by making our records accessible to the public. We hope anyone who digs into this history finds something new to inspire them to make a band, to create something because that’s how we all got started—we just did it ourselves.

The collection chronicles the earliest days with CIA Records, the Houston-based independent label we shared with our brother band, Really Red. Culturcide was also on the label, which was international artist Mark Flood’s band with former SugarHill Recording Studios president Dan Workman. So much of the collection is handmade artifacts. In a pre-digital music era, we wrote and received letters, swapped zines, and exchanged records with bands and DJs in other cities in order to create an incredible network. The collection has one-of-a-kind show flyers and other types of ephemera that represent this DIY music network. It’s fun to reread letters from over 30 years ago with drawings from fans and reminisce about how much promotion we had to do to get our music seen and heard through obscure fanzines and connecting with other indie labels. There’s one artifact, a collectible Sub Pop Records cassette which has one of our songs on it and a letter from that iconic label. There’s also the visual art aspect behind the punk objects in the collection, such as handmade, cut and paste flyers and posters. Many of those early punk clubs and music venues no longer stand, so without the flyers they may be forgotten. It’s like time traveling when looking back at the art that was made for our past shows, each with a memory of place with bands who no longer perform.

There are some interesting press materials in the archive from our experience working with New German Cinema pioneer Wim Wenders and his crew while appearing in his internationally acclaimed film Paris, Texas. That film went on to win the Palme d’Or at the 1984 Cannes Film Festival as well as the FIPRESCI Prize and the Prize of the Ecumenical Jury. Trish befriended Wenders who had been traveling throughout Texas making this beautiful “road movie,” and he became a fan of our experimental sound.

Last but certainly not least, this collection contains our music! We are donating cassette tapes which have our recorded history as well as on-the-road interviews on them, some unreleased materials on analog media, our original records from the ‘80s through our most recent EP, It’s Too Hot for Revolution, which we released as a collectible red vinyl in 2017 and debuted at Lawndale Art Center.

The collection is currently being processed at UH Special Collections. For questions about materials in this collection or to request access, contact Mary Manning.